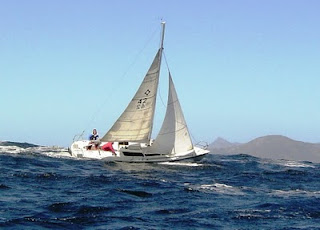 
UPDATE 18 October 2016: There have been several recent enquiries from prospective builders for this design, and Roy McBride of CKDBoats is considering cutting a kit if there is sufficient interest. The kit will be kept very cost effective as it is proposed to use Redwood Marine Plywood(BS1086 - stronger than okoume plywood but slightly heavier) - and to offer good alternatives to Meranti for framing lumber.

Looking for info on the history on the RCOD, I have been astonished to discover how ground-breaking this design was. In many ways, the Stadt / RCOD is to modern sailing keelboats what Issigonis’s Mini was to modern cars. Well perhaps not just the RCOD itself – it was the evolution of a few earlier Stadt designs, that culminated in this concept.

It all started when the wood mogul Kees Bruynzeel invented "hechthout" a new type of plywood, suitable for boat building (amazing how often advances in materials lead changes in design concepts). Being Dutch, he was a sailor, and as it happens a friend of E.G. van de Stadt (Ricus). So Stadt drew the “Valk" - in 1939, which is really a hardchine sharpy of those days - a dinghy, with centreboard and spade rudder, and a very successful and fast design. Shortly after Bruynzeel wanted a see-going version – Stadt drew the Zeevalk. It won Fastnet in 1952. And so we have a dinghy converted to an ocean boat. . . . the amazing part of this is that it was the first keelboat to have a wing/fin keel with a balanced spade rudder (according to what I have read – most designs until then had long integrated keels with keel-hung rudders). For that time, Stadt was unusually skilled in hydrodynamics it turns out, and the result was an underbody that had a much lower wetted area, low centre of gravity, and very impressive handling with the large spade rudder right on the transom. It was narrow of beam, with fine bows, making it able to punch through chop, while maintain a flat run through to the stern, which enables the hull to plane well, which it does!

It also sported a simple fractional Bermuda rig, gaffs being the norm until then. It was very light, even by modern standards, and the hard-chined design was ideal for plywood and home-building. In essence, the RCOD is arguably the first of the modern sailboats we know - and still amazingly fast by any standards. Its narrow beam, low centre of gravity and high coachroof give it excellent reserve stability (can right itself from around 140 degrees or so), making it safe and seaworthy for offshore racing.
Van de Stadt hated the design rules that were being developed at that time. As a former member of the IOR committee, he resigned in protest at the unsafe trends he saw this rule encouraging. I expect his main complaint would have been the element of wide beam that was being encouraged, for I have never seen a Stadt design that is wide in the beam, or for that matter many formula boats that aren’t . . . Designers have got past this in many ways today with sophisticated computer models etc, and fairly wide boats can now be safe, but I can vouch that the early Stadt boats sail very well, are very safe, and go like the clappers - especially downwind. They would compromise on cabin space and upwind power though, and the low freeboard makes them a bit wet when the wind is up.

RCODs competed widely in all offshore races in SA, usually with at least a podium finish, and held may speed records until recently, eg Richards Bay to Durban, RCYC to Dassen, several others. When the records were broken, it was usually by a 50’ maxi of some sort.

Possibly the most telling result for an RCOD was the 2006 Cape to Bahia race, where Suidoos-2 arrived 3rd on corrected time. Skippered by the Ancient Mariner Gawie Fagan (80 years old!!!), they achieved 250 miles per day for the first three days! - in a 9m boat! If you think about it, that’s nearly 2x hull speed for 3 days . . . on average!!!!!!!!!!! Many modern designers would struggle to beat that, and so would quite a few modern (and younger sailors)!

At HBYC, Pat West and Dick de Kroon have campaigned a GRP RCOD called Shosholoza (1) for about twelve years. This is an ordinary club boat, with old sails and simple rig, and usually sailed two-up. So you wouldn’t expect fireworks, but I can say there have been many occasions when this boat has had amazing results and is up along with the front of the fleet, and Pat recalls an occasion when they hit 17 knots on a broad reach. From my perspective, it also points very well, and makes almost no leeway, even if it does heel a tad . . . But for a design that is now about 50 years old, it’s quite astonishing! 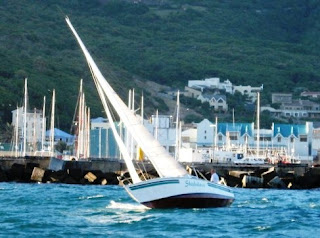 In 1933, he and his wife Lies started a boatyard at Zaandam, where they lived aboard a houseboat in the canal, designing and building canoes and dinghies. They developed a successful business despite the set back of World War II, and not overcoming their starting losses until 1950. Among many innovations in yacht designs: the wing section fin keel and balanced spade rudder combination, the first very fast plywood yachts, the world's first series production GRP yacht, and the world's first maxi - "Stormvogel". Although he participated in the development of the IOR rule, he later resigned from the International Technical Committee in protest over US dominance in offshore racing rules. He feelings about how rating rules fostered "unseaworthy" was well known." Under his leadership, E.G. van de Stadt and partners continued to produce many designs and were also at the forefront of research into yacht aerodynamics and hydrodynamics. He was reserve helmsman for his country, Holland, in Olympic yachting in 1936 and was very successful in offshore racing for many years. After his retirement in 1978, Van de Stadt Design was run by the partners Cees W. van Tongeren, Hans R.F. Korner, Klaas Buis, Walter Galjaard (now retired) and Anita de Vos. The company has produced over 400 designs since 1933 and there are some 25.000 van de Stadts afloat in the world today.
RCOD Vital Stats
LOA 9.05m
Beam 2.13 (skinny!)
Displacement 1800 kgs (light)

PASSAGE DETAILS: The time for this passage is recorded from the time that the yacht crosses the line of the Harbour Mouth in Richard's Bay until the time that she crosses the line of the Harbour Mouth in Durban. The line of each harbour mouth in both cases is the line between the north and south breakwaters. Crew member Peter Morgenrood recalled that the time could have been even quicker had they not missed the gybe into Durban and had to spend 15 minutes tight reaching with the pole on the forestay.

TROPHY: The Ivor DeBeyer Memorial Trophy, originally donated as a prize for the first Durban yacht to finish the Mauritius to Durban Race, is to be awarded to the current record holder and will be passed on to the yacht which breaks this record. In order to be eligible for this trophy and for the record to be recognised Smooth Sailing must be notified in advance of any attempt on this record.
______________________________________

Letter from Chris Sutton (the Durban one) to Roy McBride , who owns a very competitive RCOD called Foxy lady, (now for sale I think)


Hi Roy - I still own Foxy Lady which is a fibreglass RCOD. And yes these little boats still go like smoke. During the 2008 Vasco we regularly surfed at speeds of 18 kts. After the race the log and gps showed max speeds of 22 and 23.5 kts respectively. Neither of the drivers remembers achieving this speed but we may have been too busy watching the spinnaker leech to think about the log. We sailed a there and back race on Sunday ( abt 14 nm ) and finished first over the line and handicap. Although Foxy is for sale (I have to sell her to finance refurbishing my Morgan 31) I cannot think of a better budget boat for the SA coast. Her replacement, the L26 is a good boat, but you can't do ocean passages on one. As you probably know Suidoos II has 4 Atlantic crossings under her keel (2 South Atlantic Races from which she returned on her own bottom).


Chris
Posted by justin.phillips@mweb.co.za at 9:39 PM