Angelo Lavranos has a huge portfolio of designs to his credit, covering many different concepts. It is always interesting to look at his designs, because they conform to no particular dogma and are all based on very good thinking and experience. Including mini-racers, super-maxis, medium cruisers, cats, houseboats and powerboats - he has done them all . . .
I have had a few requests to cover the L36, the Atlantis 36 and the Tosca 36. It makes a lot of sense to look at them together - they are three quite different but equally good forms of a medium sized performance cruiser.

The L36  - is the first design of the three - around 1977/8 - and maybe the most successful. This is also possibly the purest design in that she was designed straight from Angelo's pen - no untoward influence during the design process. Angelo owned one personally for about 16 years viz. "Phoebe" now of FBYC. The L36 is a medium/heavy displacement hull, carries a poweful rig, is a strong all-rounder and held some interesting race records - Cruising division in Cape to Uruguay, and Durban - Cape Town under sail. Designed in the late 70s, she was designed as a "little sister" to the Compass 47, with known properties and dynamics. She carries a masthead rig, not so common today, but which I personally prefer to the modern trend of dominant mainsails - especially for cruising. I am not quite sure why the dominant mainsail thing happened - was it IoR or similar, or the attratction of bendy masts, or the S&S doctrine that favoured fractional rigs? Hopefully I can get a designer to explain this soonish. 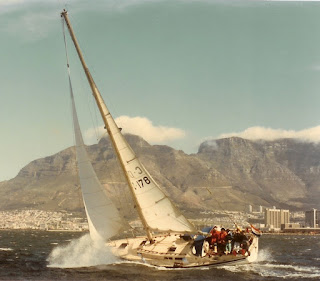 L36 flying along in Table Bay.
The L36 is quite a perfomance boat, and a great all rounder as a performance cruiser on all points of sail, though I expect her strongest point will be upwind, where her powerful keel and relatively low wetted area will work well. The hull is moderate - not sportsboat, and not heavy long-keel cruiser. The ends are reasonably fine, making a good sea-boat as well, but not exactly a "downwind racer". The longish keel and deep skeg-hung rudder right on the stern, combined with a fairly slender hull, will give her good balance of responsiveness and ability to track and go straight, whilst not having excessive draught. I can't see this design having any vices, and by reputation they do not. Certainly this has been a very successful all rounder, great for cruising and racing. Despite her proven performance, there are no obvious compromises as a cruiser - certainly she would be on my list as a very good blue-water liveabord cruiser for a couple. 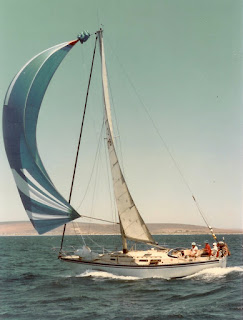 Today we can easily describe this design as a very good conventional performance-cruiser. However one must remember this was quite amazing in the late-70s - pure eye-candy I am sure - and is a credit that so many boats still look exactly like this. . . . At least 50 were built, all in GRP as far as I know. 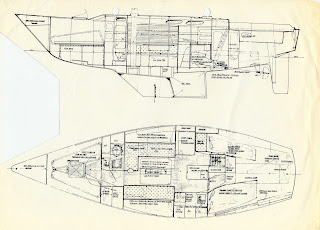 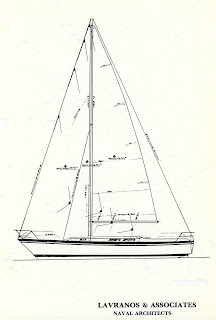 Masthead Bermudan rig makes it very simple. The genoa is very large and dominant but makes for a very stable outfit under way. Single backstay. Deck has nice flat surfaces to move over. 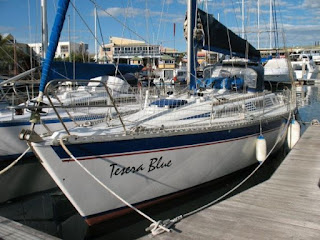 The Atlantis is a light displacement sporty boat, similar to the French production boats that have become so popular. Great for club racing, with good looks and accommodations, and the now very popular sugar-scoop stern. They seem to have been well-built, I remember being very impressed with the finish and quality of an example we had in Hout Bay a few years ago. It had just come back from the Caribbean with her "novice" crew! While not "out and out" blue-water boats in comparison with say the L36, I would venture to say they are better sea-boats than most of the French production boats around - you can see from the drawings Angelo doesn't do floating caravans unless they are labelled clearly as "Houseboats"!! 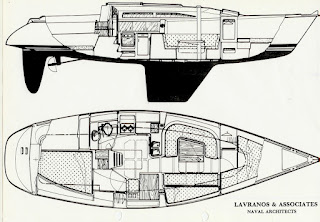 Compared with the L36: Slightly flatter underbody, spade rudder, slightly higher aspect keel, sugar-scoop. The stern is far narrower than the latest Mediterranean creations, probably losing a third double berth in the proces, something they seem to be hell-bent on getting into even 30-footers today! 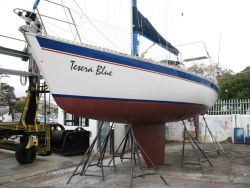 Not to repeat much of the publicity blurb that was released at the time, here it is (double-click to expand) 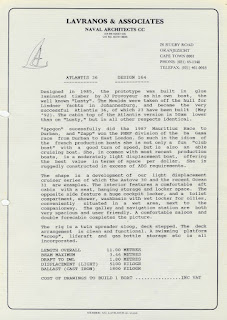 There is little doubt this concept of boat has become the most popular over time - especially as club racers, coastal cruisers and charter boats. Designed in 1985, it is still a very contemporary looking design.

For some reason this is my personal favourite of the 3 - and one of my favourite boats ever. Sometimes you just know it when you see it. . . where have you seen a nicer centre cockpit on a boat this size? or any size? 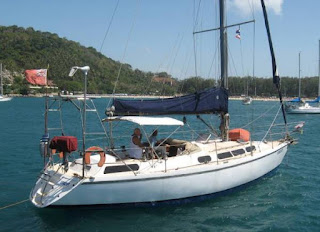 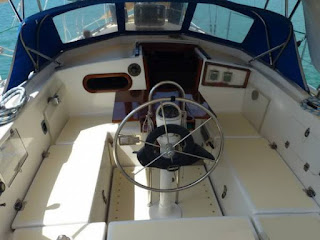 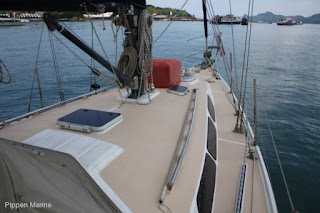 We used to have a great Tosca 36 in Hout Bay called Jandy. Her two successive owners were extremely happy with her, and the second one was able to attest to her seaworthiness through an amazing adventure I don't have space for here unfortunately. I should have bought this boat myself . . . not sure where she is now.

Quoting from Angelo's email to me on the Tosca "Seeing the sucess of the L36, Fred Scholtz asked me to design the Tosca 36, (design 0103) as a production boat, to be cheaper to put together than the L36. Center cockpit rather than aft cockpit. She has a higher volume than the L36, with her beamier, firm bilged, full sterned hull, less ballest, smaller rig, less displacement. Less of an "all rounder" in performance than the L36. More wetted surface and slower in light airs, but faster reaching in a breeze. The original boats were simple & light. Two circumnavigated. Unfortunately as time went on the boats got more elaborate, aft cabin walkthrough,  bigger engine, more tankage, bigger rig, stern platform etc."

When first sighting a Tosca, the main features appear to be the full beam, large and protected centre cockpit, simple Bermudan masthead rig. Typically the decks are clean and uncluttered. Typically they move a lot faster than you would expect of a boat this beamy. The decks are open and give great space to move on. She really is an inviting platform, with nice curves and overall appearance. I have seen some very nice dodgers and doghouses built for them too, but the level of finishing varies enormously as many were owner-fitted, rather horribly in some cases. . . .

Inside, the space is unbelievably voluminous, despite the centre cockpit. The for'ard section of the hull is large enough so you fortget there is another cabin aft. She has loads of packing space, and the size gives a great feeling of security. Layout is conventional - except the saloon is so wide you have space for an extra pilot bunk above the settees if you wish.

The aft cabin is a very nice feature - not an afterthought tacked on in place of the lazarette. It is comfortable and spacious as a cabin, though owners use them for all manner of things - storage, workshops, granny flats etc. Per the original design they are accessible only via the cockpit - but many have been modified for internal access too - not practical in my opinion though. The one I knew had this feature - the owner called it "lumbago alley" . . .

By far the most amazing feature of the Tosca is the generous centre cockpit. It is deep and secure. The shape is exactly right - the mouldings fit your back. It is high and dry above the water. It justifies a good dodger (or doghouse) beautifully, and makes life very very pleasant for the duty watch or the drinking parties equally . . . its enough to justify the whole boat. Jandy - in Hout Bay - was always the boat people congregated on for drinks or tea when the wind blew. I really wish there were more boats with this feature.

The Saloon was also great - not unusually great, but quite adequate - which means there is always a "nice place to be" on the boat - although the V-berth was  a bit small on the example I know - but hey - the aft cabin was great . . .

Dynamically - Toscas sail well. They held some good passage times on the Governors cup - Cape Town to St Helena - a nice long downwind reach - and are clearly able to survive fierce weather. I did see one being laid over in a sudden squall under full rig in Hout Bay's "Thunder Alley" one day - spreaders in the water - she popped right back up without changing direction and kept going . . .

Being light and beamy, and roundish, they are good trade-wind cruisers, and very comfortable. I reckon they'll manage upwind quite well except in gale-force conditions. Reaching would be the preferred point of sail, and they actually do quite well round the cans in moderate conditions. 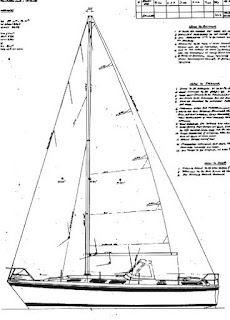 The rig is delightfully simple - a single spreader affair, with masthead Genoa and manageable Main. Cheap and easy - and great for cruising. Often one could use the Genoa alone. Roy McBride - of CKD Boats - has fitted several of these and reckons they represent one of the best value cruising options anywhere. I agree. 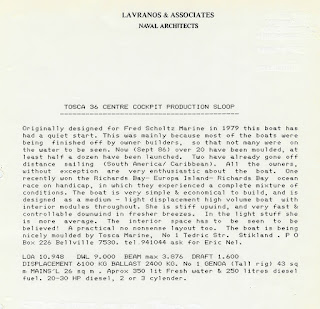 Posted by justin.phillips@mweb.co.za at 4:31 PM